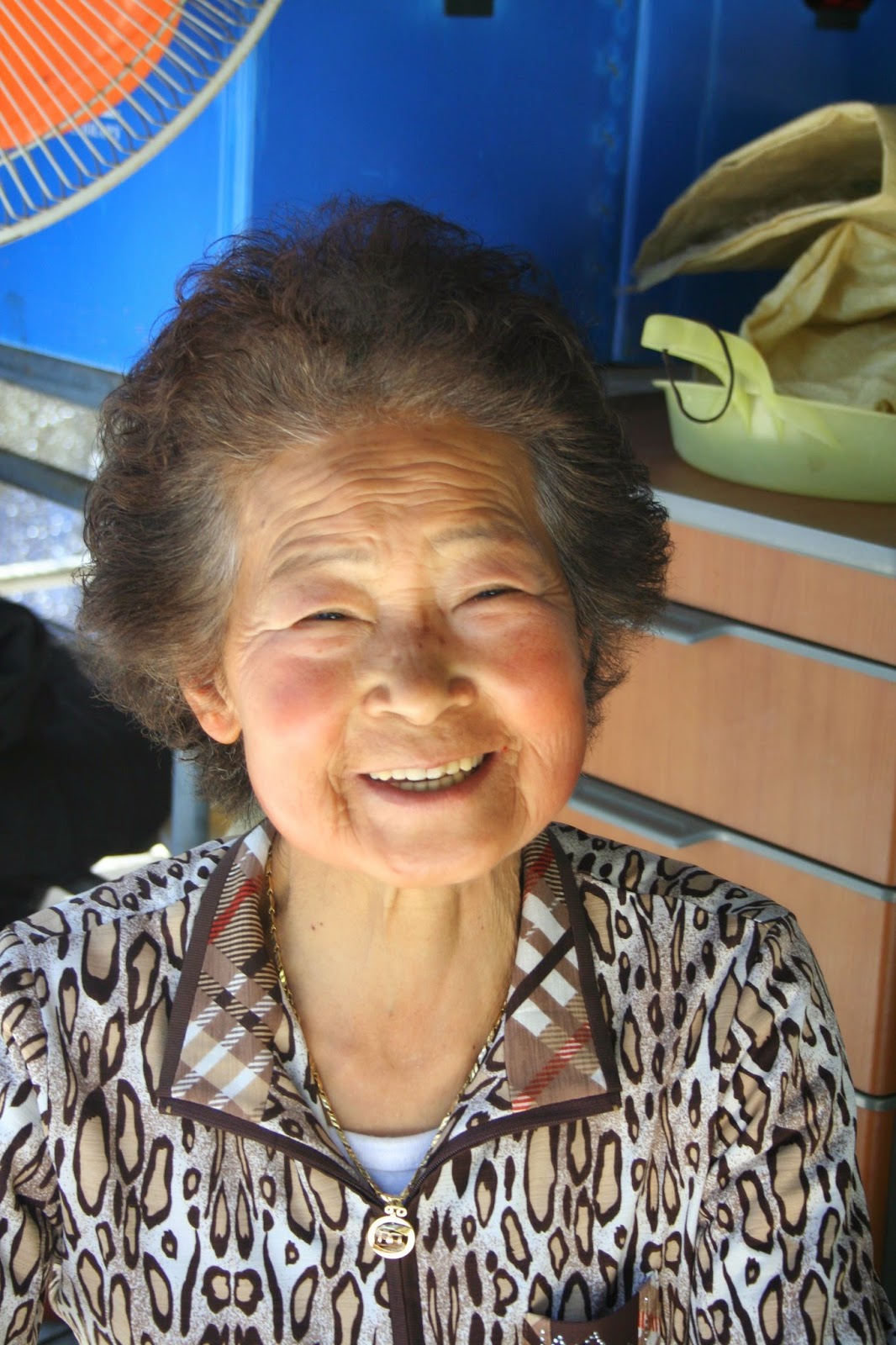 Jeong Jae Yeun "Hwangcha Halmeoni"
This post has been long in coming.  In May 2014 we returned from Tea Tour Korea where we had the pleasure of meeting again the artisan tea producer Jeong Jae Yeun.  Our tour took us to many artisan tea producers, at most stops we asked the simple question, "How did you become interested in producing tea?" Nearly all of their answers began with, "My grandmother made tea."  Well, simply put, Jeong Jae Yeun is the epitome of that tea making grandmother.  She is Hwangcha Halmeoni (할머니 황차). In fact she calls her tea Halmonicha  (할머니 차)
A closer look at Jeong Jae Yeun and her delicious hwangcha might help us understand both her and this tea better.

It truly is 'Grandmother's' tea - Halmeonicha. When you question her, she explained that she just makes tea like her mother and grandmother before her.  "Back then, we made this tea for medicine." she explained.  Now she makes it for the monks and others who have discovered her. 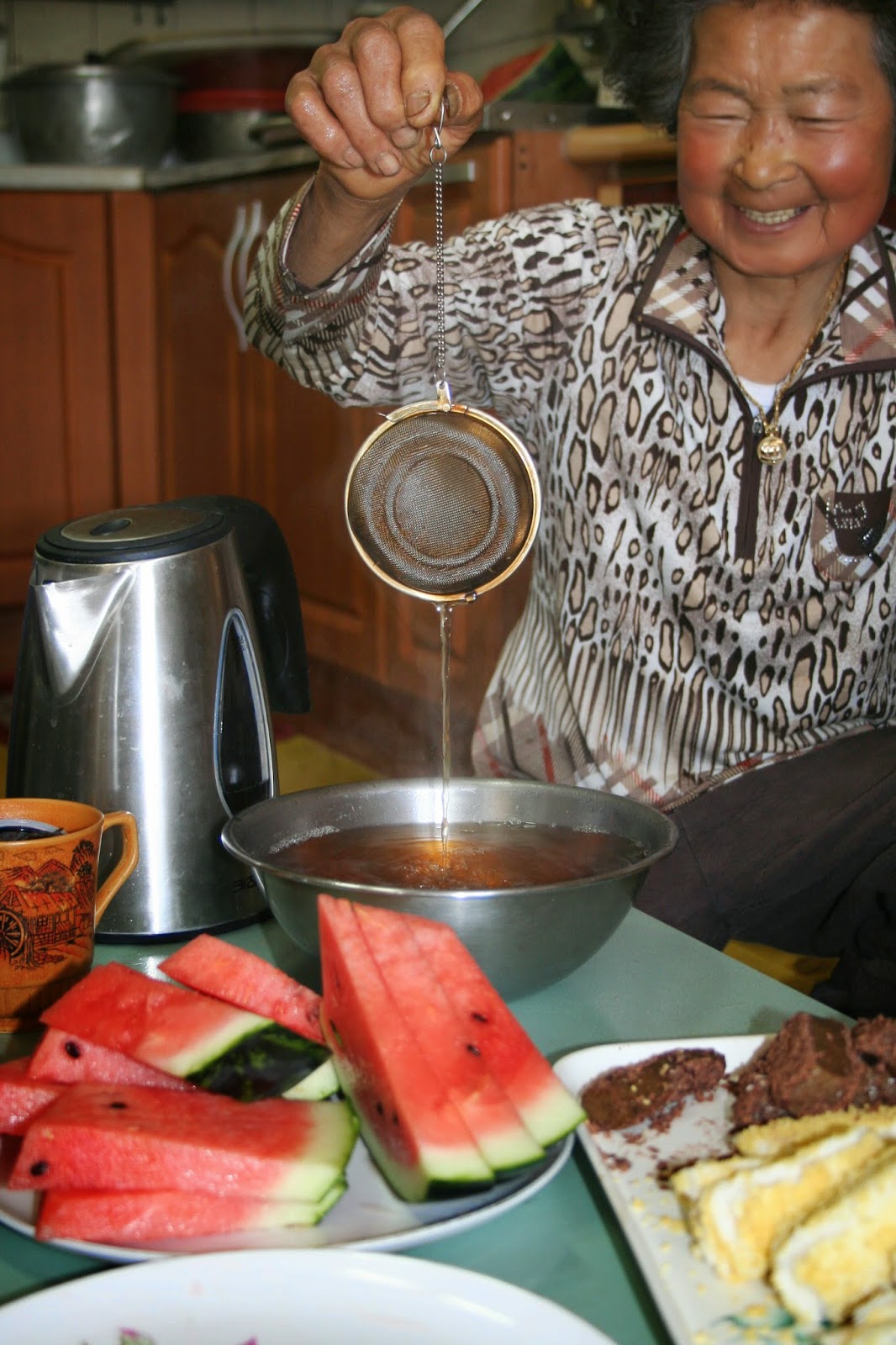 "I don't know how to brew tea the right way."  she said.  "The monks tell me, 'You just make it.  We'll brew it'."  All the while she is talking she is cutting watermelon and rice cake for our group.  With this statement she brought out a large metal and well used tea strainer, filled with her tea leaves, and dipped it into a bowl of hot water.  Still her tea was delicious.   "I have a teapot Park Jong Il's father gave me but it seems too much trouble to use." she explained.
This attitude about brewing tea reminds me of Cho Ui the famous tea monk's statement, "Just make tea and drink it."  Koreans do things naturally and it is difficult to get more natural or direct than this.

When I first introduced Jeong Jae Yeon to the tea world, I had been told that she made her tea "before Buddha's birthday".  That word is out there and must be corrected. In the spring of 2014 I was really concerned because Buddha's Birthday was very early that year.  "Could she make enough tea?" I wondered.  To my surprise, when we arrived after Buddha's Birthday, she was still making her tea. On that tour we discovered she begins making her tea before Buddha's Birthday. Something got "lost in translation".  In any case, it is rare that a tea artisan would make balhyocha before Buddha's Birthday because those leaves are reserved for the finest green teas.  That she continues to make tea after Buddha's Birthday doesn't diminish her teas in any way. Although not all her teas are made before Buddha's Birthday, Jeong Jae Yeun remains the epitome of a Korean grandmother Halmeoni Hwangcha (할머니 황차) and she remains a fantastic tea artisan.  Her teas are delicious - made before or after Buddha's birthday!
We all should have realized that while she does begin her pick and processing before Buddha's Birthday she wouldn't stop. - actually couldn't stop in a year like 2014 when Buddha's Birthday was celebrated so early.  She would have had a very small production of tea and even a small artisan producer like Jeong Jae Yeun needs more than a few kilo of tea to simply make a living or more likely supplement her income.
How many other producer even start their production of hwangcha before Buddha's birthday?  Many of the artisan producers we met on our tour were making balhyocha but only after that had made their nokcha and long after Buddha's Birthday.
I really do enjoy her tea and there are at least three reviews of this tea that support me in this endorsement. One by teadb i.e. James and Denny who are creating some excellent podcasts on tea. Another by Adam Yusko who is doing some great Youtube tea presentations and a third on Steepster posted by Cwyn a wonderful blog on tea.  There may be more. With the exception of TeaDB.org, to whom I did  send a small sample for possible review, I had no idea this tea would be reviewed.  Even in the case of TeaDB, I had no idea their response to it.
How does she make the tea?  The process is simple but timing and temperature are intuitive and lie within the producer.  That is the 'secret' even the artisan producers themselves cannot give us. 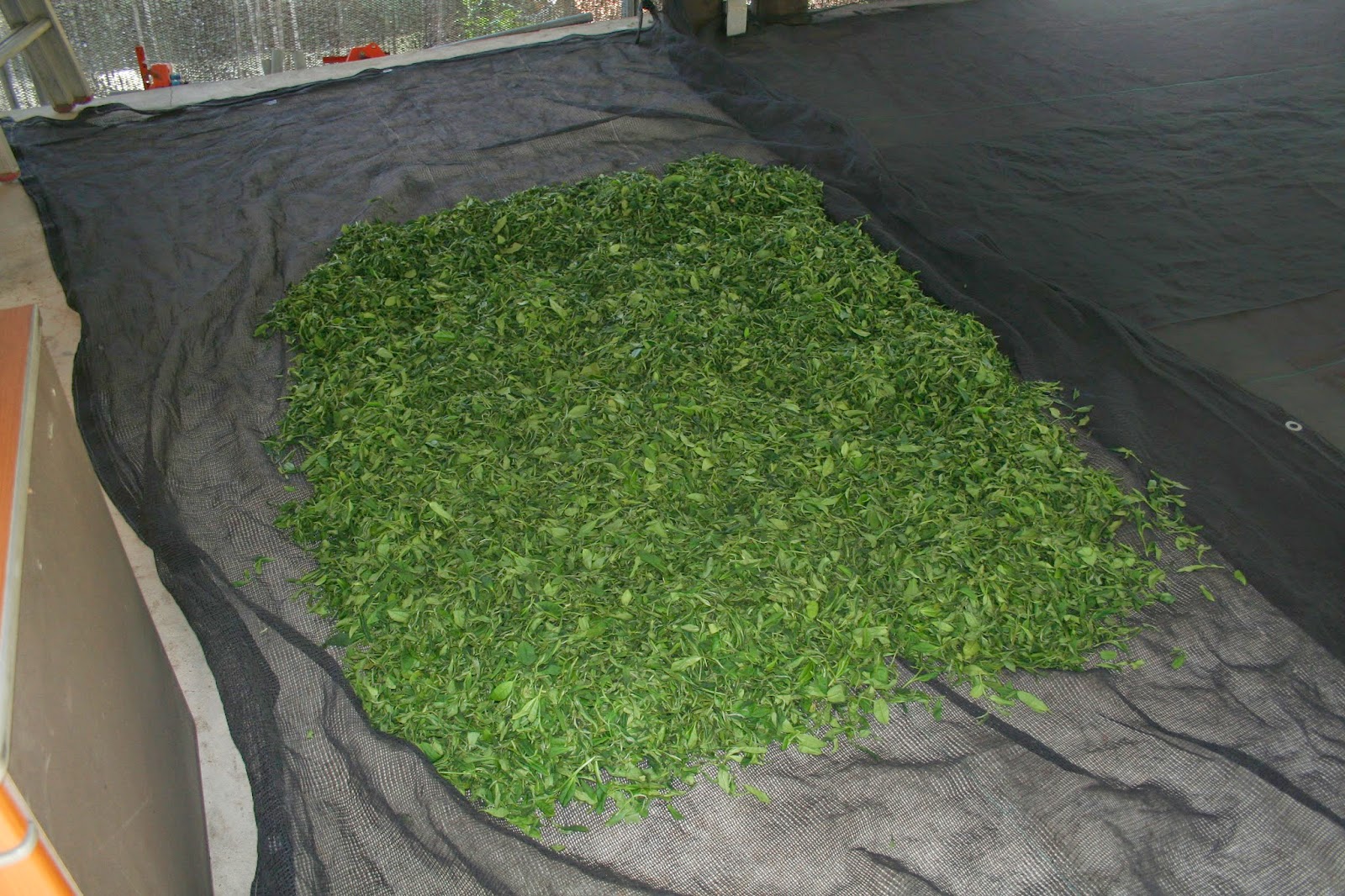 The tea leaves are picked and spread out to wither under cover protected only from the sun's rays and any strong winds.  After withering for a day or so - the time is critical - the leaves are rolled by a small rolling machine.  I know you wish it were all by hand but rolling is really laborious work and her hands are getting older.  More and more even younger artisan producers are turning to small machines to help them with this phase of production.  If you have ever watched or attempted tea production by hand, you would quickly understand the need for this machine, particularly when the producer gets older or is alone.  The leaves are intact and the quality undiminished. the machine's use does not diminish the quality of the tea only its price.
Then the rolled leaved are spread out on a very clean ondol floor in a room reserved just for her teas.  (She sleeps at home in another building next to her tea making facility.) In that special ondol tea room the tea receives its final blessing. After it is completely dry, it is bulk packed in bags weighing about 350g. Because the tea is bulk packed it comes in packages of between 330g and 365g + or -. I sell it simply as 300g or backage in into 40g bags.
This is an exceptional tea and has received more reviews than any other tea we sell. So far, we are the only Western source for this delicious Halmonicha. Contact us.