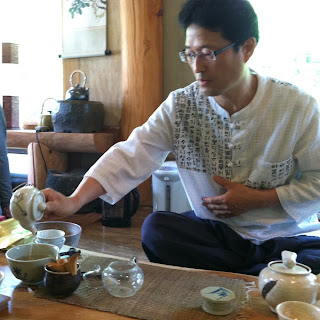 Master Kim Jong Yeol
. . . and BEYOND!
I have been working with tea producers for about 14 years and my history with Korean tea precedes that for a few additional decades. In all that time I have not had a Korean tea producer or tea master explain their concept of the whole "tea event" from Plant to Cup in the way Kim Jong Yeol recently did for us at Morning Crane Tea. So this for me is truly a rare ". . . and BEYOND!"
Let's begin with the tea plants that grow not far from Kim Jong Yeol's home in the heart of Hadong, Korea. Hadong lies in the heart of Hwagae Valley.  Hwagae Valley lies in the heart of Jerisan.  Jerisan lies in the heart of Korea's tea growing region and is Korea's 'holy mountain' for tea. Beyond that, it is said that Kim Jong Yeol's tea plants lie in the very best tea plant growing area in Hadong where they are left to grow wild without fertilizer or bug sprays.
I know there are some familiar with tea, but unfamiliar with Korean tea, who will exclaim, "How can you grow quality tea without adding the proper amount of fertilizer to provide all the needed nutrients for the tea plants to grow?" One must remember that this is Korean tea. Korean also does not graft together tea branches to produce identical leaves like producers in some other countries.  The foundation of the basic, but more complex, aesthetic philosophy that permeates Korean culture - including tea is, "It must be Natural."

This is the same Korea that gave you what the Japanese call the Kizaemon Ido teabowl a dawan, chawan, chassabal or teabowl that connoisseurs claim was "born not made". Are the best teas also "born not made"? 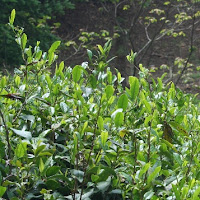 The answer to that question is more complex than this post intends to be, so if there is expressed interest, I will return to it in another post. However, tea plants allowed to grow naturally like Kim Jong Yeol's are in many ways like those old natural teabowls. Kim Jong Yeol's tea bushes produce deep roots naturally. These tea plant roots dig deep into the soil easing from it the natural tea enhancing nutrients that give these Korean teas - life.
Like ancient Korean teabowls, these Korean tea leaves themselves are not smooth and controlled but rather complex and uncontrolled. 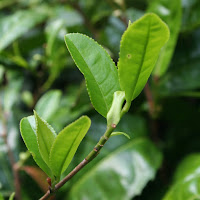 Whether the leaves are plucked 'ilchangki' style i.e. one stem with 2 leaves or are plucked 'ilchangsamki' style i.e. one stem and 3 leaves. Each plucking style with the complexity of leaves produced in this natural manner adds to the underlying substance of the tea and thus to the final flavor - the final tea.
While Kim Jong Yeol has not fully explained his production secrets - after all they are secrets, the base of his production process for his green teas is teokeumcha that is bucho-cha style or roasted. To understand this method more you might refer to the post I wrote on Yi Ho Yeong before her untimely and sad passing.  While I am sure the two approaches (Yi's and Kim's) are not exactly the same you may gain some insight into teokeumcha by reviewing it.
My next statement may seem obvious, but sometimes the obvious should be stated. We all approach our work based on who we are as human beings.  Beyond his innate intuition about tea production and what he learned from his family, Kim Jong Yeol has also developed very insightful intellectual understanding. In a recent conversation he said (translated):

I tried the Chungiljem Sejak: it is absolutely unique. I am really impressed! It is like some liquid I fancied one would be served from elves in Elrond’s house in “The Lord of the Rings”.  You come from a long and desperate peregrination and then the elves give you some shimmering liquid out of tiny cups - and it is running down your throat directly into your soul - spreading life and clarity - this is the tea of Kim Jong Yeol.
So, my next question is: Is it possible to repeat the order?

A truly remarkable remark about Kim Jong Yeol's new Chungiljem Sejak . . . and the answer is, "Yes".  But if it is after the mid of June you may have to wait until next year or try to influence us to have a September TeaBuy Korea.
So, this is the tea of Kim Jong Yeol.  Kim Jong Yeol has given careful thought to all aspects of tea: 1. The growing of his tea plants, 2. The select plucking of his leaves by hand using either the 'ilchangki' or 'ilchangsamki' style of selection at the proper times related to, 3. His personal and carefully nuanced approaches to producing his various teas. 4. Then there is the brewing.
Pause: Before moving on, I want to make this comment. Good water is essential to elicit the best flavors of quality tea. Indeed many tea connoisseurs credit the quality of the water in various countries for the type of teas those countries produce. It is not surprising that Kim Jong Yeol lives in the 'foothills' of a great mountain range. The Baekdudaegan mountain range, runs down the entire length of the Korean peninsula connecting North and South Korea.  The great Baekdudaegan, home of many Buddhist temples and shrines to the Mountain Spirits, is Korea's watershed-crest-line and it culminates in Korea's 'holy mountain' for tea - Jerisan. Jerisan provides Kim Jong Yeol with excellent fresh, clean and clear water. Many have suggested that it is because of Korea's water that so many exceptional green teas are produced there. Georg, the above reviewer, lives in the foothills of the Alps where I imagine his water is also fresh, clean and clear. 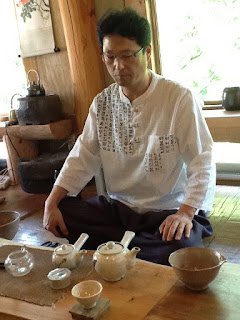 Kim Jong Yeol preparing to brew
Resume: Kim Jong Yeol's brewing suggestions: If you have 'hung around' Korean wild and semi-wild tea at all, as I have, you soon learn from multiple sources that teas produced from these unfertilized deep rooted bushes can take the heat.
We offered 3 Green Teas by Kim Jong Yeol: All three are produced tteokeum-cha or bucho-cha style - roasted.

Pause: Notice the plucking dates. They are related to Korea's 24 seasonal dates. Some tea producers pick tea during as many as 4 seasonal dates including:  Gukwoo - April 20: Woojeon is picked before Gukwoo, Sejak is plucked after Gukwoo but before Ipha.   Ipha - May 5/6: Jungjak is plucked after Ipha but before Soman.  Here precise dates begin to get a little fuzzy but Daejak is plucked around  Soman - May 21.  While Yip-cha is plucked around Magjong - June 6.  The plucked times for Daejak and Yipcha are imprecise because most artisan producers do not produce these teas even though they can be outstanding teas.
Kim Jong Yeol concentrates his production around Gukwoo while plucking during Ipha primarily for one of his balhyochas.
Kim Jong Yeol identifies his teas under the traditional categories this way:  (translated names)
Woojeon = Butdangol (A Place for Buddha)
Sejak = Chungiljem  (Above the Crowd)
Jungjak = Koom  (Dream)
If we are strict with the traditional dates Koom could also be considered a Sejak.

Normally, we know, the water for green teas must be cooled down to 70C (158F) or lower, but that is for machine picked, machine-processed leaves that have crushed and broken leaves that have been machine roasted.
The crushed and broken leaves of these other teas allows some tea leaf flavors to emerge that are weakened or destroyed by using very hot water, so most often the water is cooled down to 70C or below
The higher temperature for my teas allows all the flavor elements like amino acid, catechin and polyphenol to emerge.

Some other tea masters I have spoken to suggest that the deep roots of unfertilized tea plants also play a part in the ability of these naturally grown hand-picked and hand-processed teas to take the heat.
As stated, Kim Jong Yeol does not use fertilizers. He explains


Some fertilizer-grown teas have a baked like smell and taste when brewed with cooler water. That is due to the fertilization. In addition, when you have felt the tea flavor had a fishy smell after drinking green tea, that was caused by either raw tea leaves picked on a rainy day or the tea leaves were not perfectly roasted. 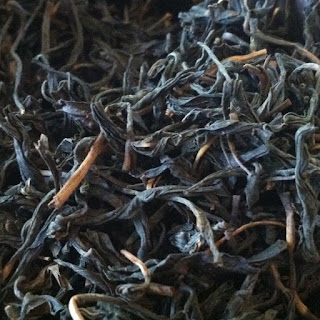 We offered 3 oxidized or balhyo-cha teas by Kim Jong Yeol: Although the dates of plucking overlap in some cases, each of these balhyochas is produced differently.

(The Sent of Sunset)

At 100C (212F) the amino acids, catechin and polyphenol come out from the leaf in the balhyochas so, we can taste all of the good elements.
Below 100C (212F), people only taste amino acid, and misunderstand that the “good flavor” they are experiencing is only from amino acid that has a baked taste.
A ‘baked’ flavor is readily found in the teas that have been grown with fertilizers therefore many tea drinkers recognize that flavor.  However, my (Kim Jong Yeol’s) teas are grown without fertilizers so in addition to the ‘baked’ flavor of amino acid, the catechin and polyphenol also emerge resulting in the fresh, clean, subtly astringent flavor of my balhyochas.

Kim Jong Yeol is a master artisan producer who takes his plants, leaf plucking and processing very seriously. I know we are left wondering exactly how he actually produces his balhyochas. He provides some insight into the production of his Buttea or Temple tea a hongcha or red tea (west black tea) by adding withering and rubbing before the leaves are dried.  I also know that wilting sometimes under shade is involved.

Kim Jong Yeol Wilting Tea Leaves Under Shade
We must understand that the processing of Korean balhyocha is not like tteokeum-cha with 2 traditional methods. Each producer of balhyocha has his or her own twist to the process. It may involved the use of onggi jars in which the leaves are left to oxidize, it may involve the use of a very hot ondol floor or a highly controlled steam room, placing the leaves in a bag and bruising before baking or any number of other methods. That is the nature of the Korean production of balhyocha.

Finally: 2 things.
First: The terms "hongcha", "hwangcha" and "oolong" are often associated with Korean balhyochas or oxidized teas. Although these terms are often used even in Korea, from my perspective they are very confusing.  I recommend this post I wrote on balhyochas.
Second: Kim Jong Yeol is one of very few artisan producers that name their teas. We translated his names into English and secured his approval. 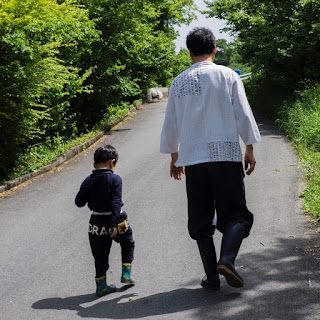 The next generation in training