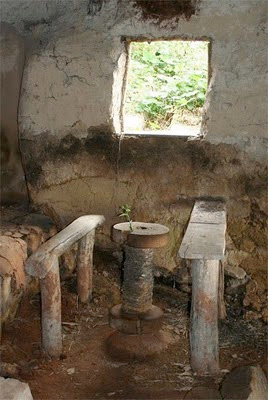 In February 2010, I wrote a post titled, The Choson Potter’s Studio and Kiln.  It was posted on my teabowl blog where I simply try to make sense of and gain a better understanding of teabowls.  I’m about to introduce Korean teabowl artists and want you to have that background before I begin introducing these special artists to you.
The ancient potter's post can be found here.  Thanks for continuing to check this blog.  Thanks also for your support of my efforts to bring you what I consider the best Korean teas and tea ware available.  Contact me if you are interested in any of our teas, tea ware or tours.  I've extended those sales until 2014.  Have a great holiday and a wonderful New Year.
We are now on Facebook. Check us out Morning Crane Tea.
Posted by Cho Hak at 10:32 AM No comments: 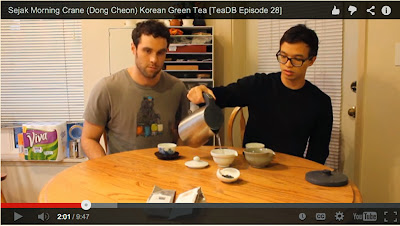 This is just an image not an active pod cast.  Links are below.

Podcast Reviews:
We at Morning Crane Tea are happy to get any review or mention we can get for our teas.  That’s simply because ‘we‘ is really ‘me‘ with no advertising budget and no real financial support.  Thank goodness, so far all reviews have been positive.  But I would expect them to be because I decided to represent the best quality tea company I could find.  That is why I chose Dong Cheon Tea as my primary Korean tea source.  You can find less expensive Korean teas but most likely not as good.  I am offering only personally selected other teas including Korean artisan teas.  In a real sense my tea reputation is on the line and it is personal.  So don't compare Morning Crane Tea with the really big Korean tea companies you can find - except in the quality of the tea where we believe and others have told us we excel.
This past September (2013) I received an email from James, an American visiting Korea in search of quality Korean teas. He was looking for the teashop that sells Dong Cheon teas in Insadong.  It is not surprising that he couldn’t find it even though it is probably the easiest tea shop to find.  There are many teashops in Insadong and no sign that says Dong Cheon Tea - in English anyway.  My first thought was, “Why is he trying to find Korean teas alone?”  I have been researching Korean teas for years and could have taken him to the best places even in Insadong.  Since the Dong Cheon tea shop is very easy to find, if you know which one it is, I was able to quickly give him directions.  Since then we have communicated several times.
At the end of one of his emails he wrote:

“A friend and I run a podcast (http://teadb.org) where we taste and review certain teas, so we'll actually be tasting/reviewing both teas very soon!
Best Regards,James”
Now James and his friend Denny have reviewed four of the teas we offer.  We are honored to be included in these important podcasts and I thought you would like to see what they think.
I’m listing these in the order they were reviewed since reviews of similar teas might influence the other review.
It is also very important to emphasize the point that Korea producers talk about first pick, second pick etc.  But we really should not be thinking about Korean teas that way.  Each tea is excellent in its own right and should be simply enjoyed as a tea.  When we say 'first pick' we think “better tea” but true tea connoisseurs know that isn’t necessarily the case.  Each tea brings its own taste profile just like all other teas and should be treated as such based on your personal taste preference not on when it was picked.
Another note: When I write, “. . . from Dong Cheon Tea Hwagae Valley, Jerisan.”  I’m writing about an organically grown tea that has had no pesticides and no fertilizer that would spread the roots.  The same is true for our artisan teas.  The tea leaves are from semi-wild or sometimes wild deep rooted tea bushes.  Jerisan or Jeri mountain is the ‘holy mountain for Korea teas.  In my opinion, Korea’s best teas come from this area.  But just like wineries you might begin with a quality grape or in our case leaf but it is how that leaf is processed that makes a profound difference.  Dong Cheon and the selected artisan producers make the difference.  So if you have tried a Sejak from another company and didn't think much of it don't blame all Sejaks any more than you would blame all Merlots or Syrahs if it were wine you are tasting.
Again the reviews are in the order of when they were reviewed.  Please return to this site after each review.
Jungjak from Dong Cheon Tea Hwaegae Valley Jerisan:  Jungjak is a slightly larger leafed tea.  Often overlooked in Korea because of the more popular Sejak, this tea is an excellent tea at a slightly lower price and is sometimes preferred because of its savory flavor.  Tea connoisseurs believe the Jungjak leaf has the most cha-qi.
Dan-Cha from Dong Cheon Tea Hwaegae Valley Jerisan: Dan-Cha is a wonderful dark red tea.  The term “Dan” is a Taoist term meaning both ‘cinnabar red’ and referring also to its health giving properties.  Contrary to the discussion on the podcast, red or black teas have a very long history in Korea dating back at least to their common use of ttokcha in the Goryeo Dynasty.  The tea ages well and we were offering two vintage versions along with this years version.  Sadly we are nearly sold out of all Dan-Cha's.
Sejak from Dong Cheon Tea Hwaegae Valley Jerisan:

Sejak is the most popular tea drunk in Korea and after watching the podcast you may understand why.  Each tea producer has their own version of it but after considerable research I selected the Dong Cheon Tea company to bring Korean teas to America.  Their Sejak was one of the deciding factors.  The second pick, this tea is small leafed and delicious. Note they are using a similar Yeohanggi to the one we have on sale.
Hwangcha from Jerisan: An Artisan Tea

Korean hwangcha teas are rare to find on the common market but possibly easier to find when you get closer to the artisan tea producers in Jerisan and out of the way tea producing areas.  This hwangcha is organic, hand picked and hand processed by an individual artisan producer that makes no other tea but hwangcha.  Her hwangcha is picked and produced before Buddha’s birthday using the leaves  normally reserved for woojeon or sejak green teas.
I want to thank James and Denny for permitting this post and for both reviewing our Korean teas and providing this special kind of insight into teas in general.  Please follow them at TeaDB.org.
Note: I'm a ceramic artist currently taking a haitus from that work to try to understand teas better so that I might improve my tea ware and at the same time bring you some unique offerings in both Korean tea and Korean tea ware.
I'd also like to sell the teas we offer to a teashop near you.   Thanks for letting them know 'we' exist and thanks for appreciating my efforts.

Please contact me if you would like any of our Korean teas  or tea ware or have questions about either.
When you visit the TeaDB site you might notice a reference to our sale where James confirms that our sale prices are below the retail prices in Korea.
Like us on Facebook.
Posted by Cho Hak at 8:51 PM No comments: 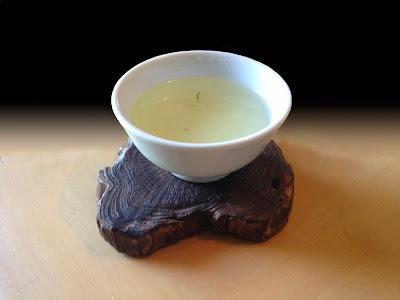 I know it is crazy for an independent tea dealer like me to even think about offering anything on Cyber Monday.  My markups are so slim already but the sale is just for the day plus a little more and I went into the Korean tea and teaware business to give you the opportunity to get some amazing Korean teas and tea ware  - so here goes.
This post is so late I’ll extend this Cyber 'Monday' Sale until Dec. 8  i.e. Monday through Sunday.  But can't guarantee we can obtain different teaware than what I have already ordered. Both tea and the following tea ware are available all week at this price but ends Dec. 8, 2013 as long as supplies last.


Now, for reading this far, with any tea order, we will make the Korean travel set or Yeohanggi available to you for the same price you would pay in Korea.  I just ordered these great teaware items because some of you have been asking about them.  I don't know how much they will cost me in either price or shipping yet so I could be losing money.  The Yeohanggi for this special "Cyber Monday" sale is just $25.00.  They are made by individual artists formed by hand and fired in reduction.  If you order before, Mon. Dec 8 and as long as supplies last.  I ordered a few Yeohanggi sets but can't guarantee your choice.  I do have a couple of spotted Yeohanggi sets ordered in addition to the white.
The Korean Travel Set or Yeohanggi Set 여행기 consists of three pieces: the pouring bowl, cup and lid.  For travel and storage, the cup fits inside the pouring bowl with lid on top.  It is Korea's answer to the gaiwan.  The capacity is 100ml so it is perfect for individual tea.
This is the set you are ordering: (wooden coaster not included) 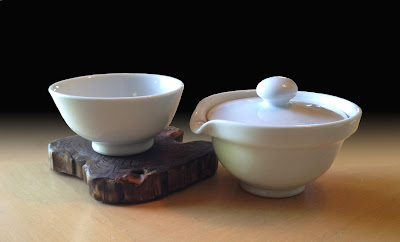 
This is the same set Ha Il Nam, president of Dong Cheon Tea uses daily.  Two alternate sets can be seen on this post and can be ordered if you don't mind waiting.  We will have a few spotted sets. (see post) 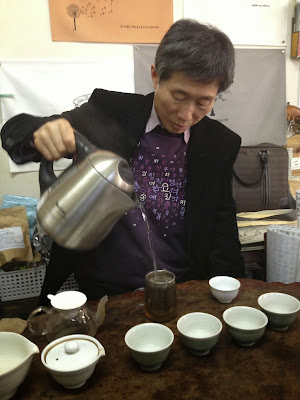 I'm sorry this post is so late.  I just decided to do it. Contact me if you would like to order or have questions.  Happy Holidays in any case.

PS:  The tea I can ship now with the exception of Dan Cha Classic, Dan Cha Gaya 08 and Yip-Cha.  I should receive everything in the next 10 days.  Just in time to get it to you before Christmas or the end of the year.

PPS: Those of you who have bought this delicious artisan Hwangcha from me earlier at a lower price will note the higher price offered here.  I recalculated my price on this tea and discovered I was selling it below cost.  It is a long story but one I'll only tell to you individually.  In any case, my apologies.